Sonny With a Chance premiered on the Disney Channel on February 8, 2009. It has an awesome, talented cast. Demi Lovato stars as Sonny Munroe. Sonny  comes to LA to star in a show called So Random. Her co-stars are Nico (Brandon Smith), Grady (Doug Brochu), Tawni (Tiffany Thornton), and Zora(Allisyn Arm). A rival show called MacKenzie Falls shoots on the same lot. The lead actor on that show is Chad Dylan Cooper played by Sterling Knight!

Demi toured with the Jonas Brothers and the cast of Camp Rock in the summer and early fall of 2010. She entered a residential treatment center for private problems. We have met Demi a few times and found her to be very sweet and caring. We believe that she was very hurt by mean people and had some problems that she needed professionals to help her with.

With Demi in treatment, SWAC fans wondered what would happen with season 3. Some people thought the series would be canceled.

Well on February 1st 2011,  we attended the first taping of season 3 of Sonny With a Chance!

We arrived at the studio with several friends who were in our group. It took a long time for the workers to come out and check us in. We were told after waiting two hours that we couldn’t bring our cameras in because they changed the audience seating area and the set and they want it to be a surprise when it airs. So we put our cameras away! We saw a bunch of our Twitter friends in line! It is fun to have freinds who share our hobby!

Then they came by and said the audience is going to be on camera now and on the same level as the set! The seats weren’t high up and weren’t regular chairs. The seating area now was filled with stools, director chairs, couches, and small round tables with chairs like at an ice cream shop. They also said that since we might be on TV we couldn’t have logos on our clothes. We turned our shirts around and/or turned them backwards. We then had to fill out papers that said it was ok for them to put us on TV. Then they had us go in and they took pictures of us one by one with a board with our name on it proving we said it was OKto put us on TV and we had to go through a metal detector.

They finally let us in! We passed by some racks of clothes and a trailer and a lady passed out bags of popcorn! They  let our group sit in director chairs. The set had  a bunch of different doors and was two stories high. Two smaller sets were built for this episode. One looked like a kitchen and one was a like living room! The warm up guys came out and got us excited. They were going to give away prizes. There was even a DJ. Later ,they would pass out pizza and candy!

People wondered if Demi would visit or be in the show but she wasn’t there. She still is going to out patient treatment and Disney has said they will give her all the time she needs to get better!

We had read that with Sonny gone, the season might be just So Random sketches without a real story about Sonny and Chad. They may have written a few episodes like this but now that Demi is out of treatment might change future episodes…

The first skit was with two kids in a kitchen and TONY HAWK and Doug Brochu are Lunch Ladies, in dresses wigs and hairnets. selling some gross  cafeteria food like Mac and Sneeze! We watched that skit get filmed like 5 times. They tried different jokes and camera angles. It was really funny!

Allisyn Arm did a skit where she threw a huge tantrum and ripped the head off her unicorn because her mom brought her cubed ice instead of crushed.

One weird thing about So Random is that Chad Dylan Cooper is a regular now! The cast are nice to him and accept him!

They did a really funny skit where Chad was dressed like a crazy ,Samari bank robber and the So Random Cast were Ninjas but they were safety minded Ninjas so they had to put on their helmets, then their shin guards, then their full body padding. Then, they had to put down their floor mats. All this time, Chad’s character is waiting to fight them.. Tiffany laughed so hard during this skit they had to tape it again.. It was my favorite!

A few skits they had filmed another day. One was a music video where Doug and Brandon wanted to make wearing socks with sandals cool!

One was the Housewives of New Jersey . Tiffany and Sterling were in this one but we didn’t recognize the other housewives….

One was with a Clay Aiken character and Allisyn asks for his autographs.

One was Brandon playing Bragging Benson. That was really silly. He would “brag” about things, but each thing was some thing he failed at.

The warm up guy was giving these “dollars” away. They have the date of the show as the serial number 02022011

It also says Season Three 2011 and the signature says Sonny with a Chance.

Near the end Sterling said something like, “When I agreed to be part of the So Random cast is was on two conditions, one I get to say Watch Mackenzie falls, Thursdays 8 central 9 Pacific and two I get to introduce MacKenzie Falls’ biggest fan, Tony Hawk. Then Tony said, “I never saw Mackenzie Falls and I don’t know who you are but……”  and they did another little skit.

Tony had to leave early and wasn’t going to stay to the end of the show. My friend who was with us is a tom boy. She looks just like a boy. Everyone thinks she’s a boy and she loves Tony Hawk. She was even wearing a Tony Hawk T-shirt. She had turned it around because we weren’t supposed to let logos show in case we were on TV. Well, my mom asked the warm up guy if Tony could sign my friend’s shirt and he said no since Tony had to leave. We were watching Tony sign the wall. On the new set, there is a black and white checkered wall. They are going to have all the guest stars sign a white square. After Tony signed the wall, he signed a SKATEBOARD! The warm up guy said someone in the audience was going to win it!

The taping lasted like 4-5 hours. We were so tired and just as it was ending, The warm up guy, Ezra and his brother in law , Darren, said they decided to give the skateboard to someone who was wearing a TONY HAWK shirt! So my friend won it! 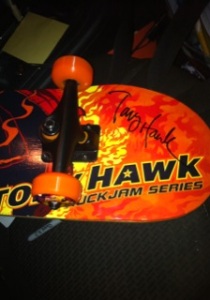 At the end, the stars signed posters and books for fans. Allisyn remembered  me (Alexi) since we’ve met several times. Some people snuck in cameras and got pics, too.

Brandon Smith’s parents and sister was there. They were so proud of him and laughed super loud at all his jokes! My mom talked to his parents and they said he had a great time visiting the White House!

Well a few other things happened that were funny and surprising but we don’t want to spoil the whole show for you. It was really fun!

We think Demi will return and then things will go back to the way they were but this is a great way to keep the series going while she gets better! Let’s keep watching the show and keep the ratings up so it doesn’t get canceled. We think we heard this episode will air in May but we might  be wrong. We also think the episode will be called Sonny With A Chance of So Random. We don’t think they’ll change the name of the show to So Random even though the stars were tweeting #SoRandom last night. We think it’s just because that episode was all So Random Skits

Support the show and the actors. Watch SWAC Tweet about it

I hope you enjoyed this blog. My mom ad I worked hard on it!