Posts tagged ‘Anything at all’

Joey King was born in Las Vegas on July 30, 1999. Her older sisters Haley and Kelli are also actresses. She was named after her grandfather Joseph. Her first commercial was for Life cereal at age 4. Since then, she has been in over 100 commercials. She has also done voice overs in Ice Age, Dawn of the Dinosaurs and Horton Hears a Who. Her first movie was called Grace. She had to act like she was drowning in the ocean. She really enjoyed the experience and was hooked on acting ever since. She was in a movie called Quarantine and got to walk the red carpet at the premiere. She really enjoyed that experience. She also worked on a movie called Battle Los Angeles where she plays a girl named Kirsten. Lucas Till is also in this movie. It should be in theaters on March 11, 2011.

I’ve met Joey at premieres a meet and greet and at charity events. Her mom says that if Joey had a choice between going to an awards show, a party or doing charity work, she would do the charity work. She really loves helping kids who are sick and she went to a children’s hospital for a screening of Ramona and Beezus. I met her at an event for Children’s Hospital Orange County. Her mom told my mom that Joey really wanted to help St. Jude’s hospital with their fund raiser. The day before Ariana Grande served as a waitress and people colored a Chili’s coloring sheet and donated a dollar to St Jude’s. ( We were there that day and wrote a blog) The next day, Joey went to Chili’s restaurant to help. Because she is so young they didn’t let her serve food but she still helped by getting people to donate money.

This picture was taken at the premiere of Debby Ryan’s movie 16 wishes!

This picture was taken t the premiere of Jake T Austin’s movie called, The Perfect Game. Moises Arias and Ryan Ochoa also starred in this movie. The t-shirt Joey is wearing was made for her with a picture from the movie on it!

This picture was from a charity event in the San Fernando Valley called Habitat for Humanity. Joey and her sister Haley, Doug Brochu, Nolan Gould, Arial Winter, Bristol Palin and other celebrities all came out to help build homes for families that needed help. I took a lot of of pictures and videos that day.

The King family is close to the Golden Family so Haley and Joey hung out with Josh and John Golden.

In 2010, Joey starred with Selena Gomez in a movie called Ramona and Beezus. The movie was based on a book by Beverly Cleary. She plays Selena’s little sister who has a big imagination and is always getting into trouble! During the filming, Joey and Selena got really close. On Twitter they refer to each other as “little sister” and “big sister” . They both went to a lot of events to promote the movie. Joey visited Selena on the set of Wizards when Bailee Madison was filming her episodes. They watched Ramona and Beezus together.

She also worked on a movie called Battle Los Angeles where she plays a girl named Kirsten. She is fighting for her life when earth gets invaded by aliens. Lucas Till is also in this movie. It should be in theaters on March 11, 2011.

When Joey had a meet and Greet at a gym in Santa Clarita Valley, she signed a bunch of autographs for me and my Twitter followers. Her sister Haley, Joey and I also stayed for ‘free play” at the gym. Haley is really good at gymnastics! Joey recorded a song called “Anything at All”. It’s playing on some radio stations and is available at Amazon and you can see videos on You Tube. Her mom brought a CD and they played it the whole night at the gym we had the meet and greet at!

Joey is a really great girl. She has thousands of fans all over the world. I feel really lucky to have met her and get her autograph. Joey is on Twitter. Her Twitter name is @JoeyLittleKing. Everyone wants her to follow them but her mom told my mom that they really want to keep following as a prize for winning contests. Joey LOVES her fans an loves to use Twitter to keep us up to date on what’s going on in her life. She Tweeted when Jay Leno gave her a pig for her birthday. She tweeted a really cute pic of her on a scary ride from Magic Mountain on her birthday. Just this week, she tweeted about going to Disneyland and asked people to send pics of sunsets. She might make a calendar of those pics and donate the money to charity. She is going to film a movie out of state for 3 weeks. I hope I meet her again!

UPDATE: Joey is in the UK now filming Dark Knight Rises. She also got the role in Oz: the Great and Powerful! She will film all summer. She going to play a China Doll in a prequel to the Wizard of Oz. This is a Disney movie and will be released in March 2013. Jay Jay, her pet pig just turned one. Joey is still connecting with fans with Twitter so follow her at @JoeyLittleKing. Don’t be fooled by posers like JoeylittleSking or JoeykinglittleS ..

I hope you liked learning about Joey!!

I hope you enjoyed this blog.

Joey is a great person!

Show your support for Joey by:

Following her on @joeylittleking but don’t beg her to follow you.. She would if she could but she has to follow her mom’s rules.

Try to get Anything At All playing on your local radio station.

If you didn’t already buy Ramona and Beezus ask someone to get it for you! 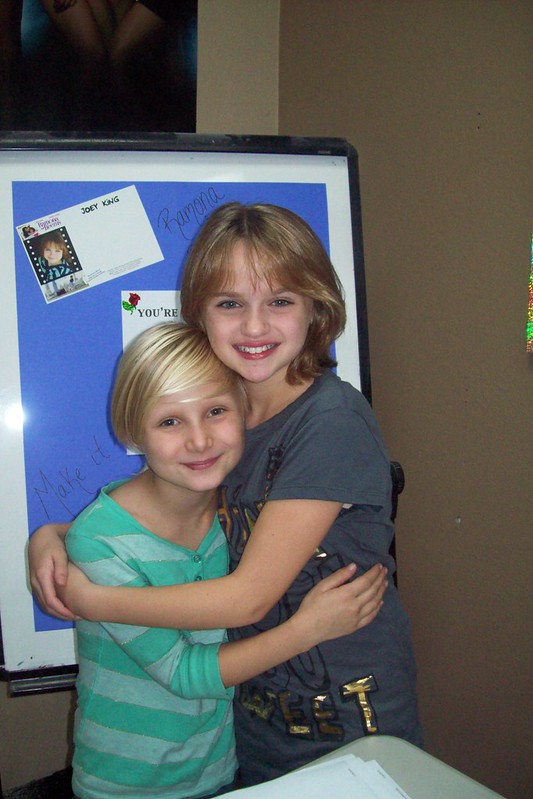