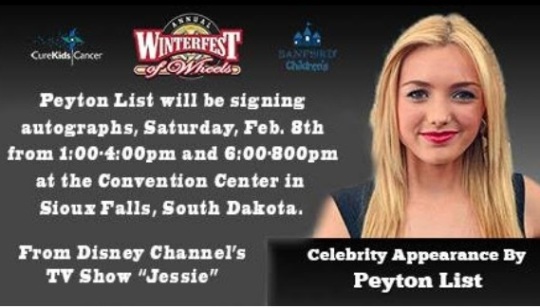 Our 2014 celebrity is Peyton List, a TV star on the ever popular Disney Channel’s show Jessie, who also starred in the movie Diary of a Wimpy Kid, acted in Spider-man 2, and 27 Dresses. We are honored to have such a talent as Peyton List at our show to help raise awareness for Cure Kids Cancer!

Peyton List will be at Winterfest of Wheels Saturday, February 8th signing autographs! She will be signing from 1:00-4:00pm and again from 6:00-8:00pm at the Convention Center in Sioux Falls, S.D.

Meet the cast of Vampire Academy at the Grove Los Angeles February 3, 2014