Another suicide or another faker

So this is an UPDATE to this story!
About 4 weeks ago Some people on Twitter were saying a girl named Ryan @enchancers_sis took her life because of Bullying. Looking at her timeline you realized something wasn’t right! Her mom got on Twitter and tweeted the same night she and her husband found the girl dead? Then the account was only a month old and the account was supposed to be the SISTER of a Greyson fan but everyone called her an Enchancer. Things were definitely suspicious.

I went through the search to tell people who were sad and crying that it probably was a fake. Most people were like , ” oh , good , thanks !”

Only one person freaked out and said “yes it’s true ! I know her! How dare you say that” that made me wonder about her.
Even though it looked weird, people were hating me for doubting saying I have no PROOF it isn’t real. She got tons of followers and became a trending topic. People even changed their profile pic for her.

So my mom and I wrote the post below:

Then 3 weeks later guess what? “Ryan” got back on her account and says her sister hacked it and wrote the lies! This makes NO sense. If Ryan knew her account was hacked she could have found a friend with a twitter account or made a NEW account to tell everyone she was fine that same day or the next day NOT two weeks later.
No, she says she tried to log in for 2 weeks. Why would her “sister” an Enchancer want him and his fans to cry and be sad? Nope, none of that makes any sense at all. The account is closed now.

Well last night a few familiar names Popped up in my time line when I went to check it was the same girl and her friends.

It seemed like they were all laughing because I met Greyson the night before. He was in a hurry and when my mom took our pic about 10 girls were running up to him from behind my mom.
His face is pretty funny like “oh man take the pic, I gotta go! ”

Then “He looks disgusted!! lol

And “saw the pic laughing = day made”

I tweeted a few of them
Saying “ouch” leave me alone”
Then about 3 -4 other of her friends all got involved picking on me saying 8 yr olds should be on Twitter attacking me and my friends, making up lies to anyone asking what happened. It was ridiculous. Those girls’ lives must be very boring to spend hours on line attacking me and my friends.
Hopefully, they will get a hobby soon and find happiness.
Yes, I kept checking their timelines to see if they were still talking about me. And they were. Every time.

Ok end of update. The rest of the post up the way we wrote it the day it all happened.

First we want to say suicide is awful ! Its very tragic and a real issue for many teens! Those teens need help from real people not to be a trending topic or to get a follow or tweet from a celebrity. We doubt that you will ever find someone who planned to kill themselves because their lives were so difficult and they felt helpless. Then because they got a tweet or became a trending Topic changed their mind.

You guys decide if this seems weird to you ? This person has been trying to trend this suicide and was VERY upset when I suggested it may be fake. Then they told followers to block and report me !!
Do you think it’s odd that the “mom” and supporter do the same (c) thing ??

#ripryan was trending for a while but with no proof of a suicide. We were suspicious that a mother would tweet the very night she found her child dead and not be able to spell. We don’t know any mothers who would jump on Twitter. We think they would be crying, calling family, calling a pastor.
It’s up to you if you believe or don’t
Our message is do research! Read timelines! Don’t just believe what you see on Twitter 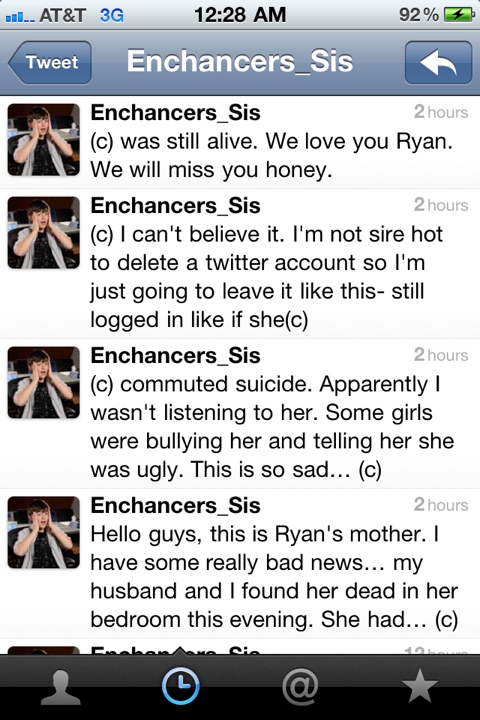 You decide and sadly yes people fake suicide on Twitter all the time and simply open a new account.

If we are wrong and anyone knows Ryan and can send in a newspaper clipping or program from her service let us know!
I will delete the post and apologize

Comments on: "Another suicide or another faker" (3)