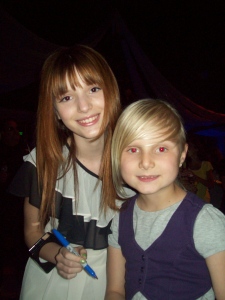 Bella Thorne at a Charity Event

Annabella Avery Thorne ” Bella” was born on October 8, 1997 in Florida. She has 3 older siblings, Kaili, Dani, and Remy. Bella’s first job was modeling for a parenting magazine when she was just 6 weeks old! Since then, she’s had over 20 roles in TV and film. She is most recognizable for her role as CeCe Jones on Disney Channel’s Shake It Up.

She’s been on Jimmy Kimmel Live, The O.C. Entourage, and Stuck on You. She was in 5 episodes of Dirty, Sexy Money. She even starred in My Own Worst Enemy with Christian Slater and Taylor Lautnter. She won a Young Artist Award for her role. She was in a movie called The Seer playing a girl who had supernatural visions. She was also in a HBO show called Big Love playing Tancy Henrickson. You probably remember her playing Max Russo’s girlfriend in Wizards of Waverly Place. The episode was called Max’s Secret Girlfriend. She signed onto a new Disney show in October 2009. In June of 2010, she began filming for her show Shake it Up. It was originally called Dance, Dance Chicago.

Bella has also been very busy modeling. She first modeled when she was just 6 weeks old! She has also modeled for Barbie, Sears, Guess, Ralph Lauren, Kohl’s, Target, Justice, She has also been on commercials for several companies.

Bella was born in Florida and her family moved to California in 2006 She loves dancing, acting, hanging out with her pets including a wolf hybrid named Voodoo. She supports several charities and for her 13 th birthday used her Twitter @BellaThorne143 to ask fans to donate to Starlight Children’s Charity. Since she started on Shake it Up, she attends several events to promote the show. I’ve met her at premieres and awards shows. She recently created her own Milkshake at Millions of Milkshakes and has done signings in different US cities including her home state of Florida. As I write this blog the cast is in New York doing interviews on Good Morning America and other huge shows! Considering Shake it Up is still airing it’s first season shows, this is amazing!

Tragically, in 2007, Bella’s father died in a motor vehicle accident. She has tweeted about it and talked about it in interviews. Bella has a very positive outlook on life and doesn’t let this get her down.

Bella was diagnosed with Dyslexia in 2nd grade. Again, instead of letting this difficulty get her down, she overcame this challenge as well. She got help from a tutoring agency and worked really hard. Bella shared this issue in a recent episode of Shake It Up called Add it Up. She shared as ceCe how she is scared, embarrassed and has to work twice as hard as other kids. She was being home schooled and is now attending school on set with her co stars.

Shake It Up is a new show on Disney Channel. The first season taped about 22 episodes. They are still playing. Hopefully, soon, Disney will announce a season 2. It was first going to be called Dance, Dance, Chicago. Bella stars as CeCe Jones. Zendaya Coleman plays her best friend Rocky. Davis Cleveland plays her little brother. Other cast members include Adam Irigoyen, Kenton Duty , Roshon Fegen, and Caroline Sunshine. I’ve been to two tapings of this show and I had a blast! I wrote another blog about the show and it’s amazing cast! 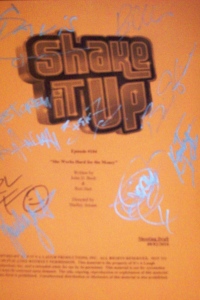 A signed script cover. This was originally called She Works Hard for the Money but was renamed Meatball It Up!

Here Bella is signing a script cover after a taping! 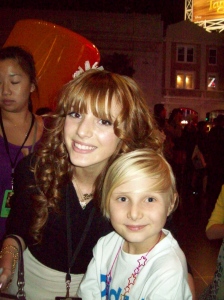 This pic was taken in Hollywood after the You Again Premiere

This pic was taken at the screening of Debby Ryan’s 16 Wishes. Bella recognized me and loves ALL her fans!

We happened to be bowling at the same place where the Shake it Up cast came to bond!
We took a quick pic and left them alone even though they invited us to stay and bowl 🙂

I hope you enjoyed this blog about Bella Thorne. Every time I meet her. She is friendly, bubbly, and super sweet to her fans! 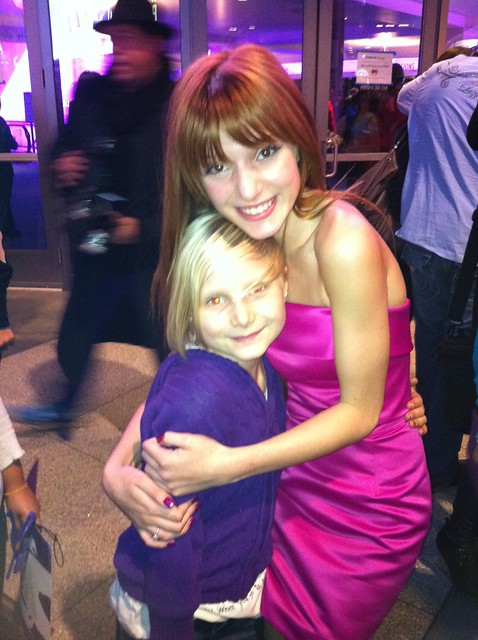 Thanks for reading this. My mom and I work hard to makes sure our facts are right and the pics are fun!

Follow Bella @BellaThorne143 She tries hard to keep up with her fans and Rt and reply. She has a busy life and 1000’s of fans/followers so be patient