I’m in the Band is a live action sitcom that premiered on Disney XD on January 18, 2010. The show is about Tripp Cambell, a 15 yr old high school student, who is the lead guitarist for Iron Weasel. Iron Weasel is made up of three guys. The  lead singer is Derek Jupiter,(Steve Valentine) the bass player is Burger Pitt,(Greg Baker) and the drummer is Ash Tyler(Stephen Full). The guys live in Tripp’s garage and help him through high school and the 4 of them try to get Iron Weasel gigs so it can be popular again! Tripp’s mom is Beth and his best friend is Izzy Fuentas, an aspiring singer, played by Caitlyn T. Love.

Two seasons of I’m in the Band have been taped at the Hollywood Center Studios in front of live audiences. Season 2 just began airing. The show has had a few guest stars. G. Hannelius played Ms. Dempsey in an episode we watched being filmed called Iron Weasel: The Video Game. Alan Thicke play Simon Craig the band’s manager. Katelyn Pacitto and Raini Rodriguez both have had roles on the show.  There was a cross over episode with Suite Life on Deck.

Tripp  Ryan Campbell is a 15 year old guy who want to be a world famous guitarist. When he meets the guys of Iron Weasel after winning a contest, he see his chance to  help Iron Weasel have a come back!  Even though he’s the youngest member of the band, he is the most mature. He usually has all the best ideas and  solutions to get the other guys out of bad situations.

Logan Miller was in a movie called Ghosts of Girlfriends past  and plays a character in Phineas and Ferb. I’ve met Logan on set and at premieres. He is a very sweet guy!

Derek Jupiter is the tallest member of the band. He is handsome, cocky and  has a British accent.  He is a good magician and speaks Japanese and Spanish.  He delivered a baby in one episode and has  big heart!

Steve Valentine has starred in several movies and TV shows. He was Nigel in Crossing Jordan. He also played a wizard/magician in Wizards of Waverly Place: The Movie. Recently, he filmed Avalon High with Gregg Sulkin in New Zealand.

Ash Tyler is the dumbest member of the band. He has two pet fish named Sushi. When he screams it’s like a girl.  He has crazy hair.

Stephen Full has been in several tv shows including Hannah Montana and a future episode of Victorious. He and his wife had a baby boy named Freddie  in August. All three were on set at a taping we were at called Weasel Gate. 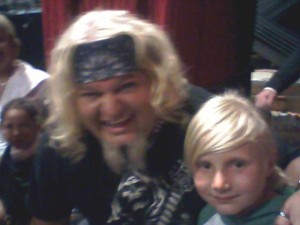 Burger Pitt has a wild personality. He like sto smash stuff and had a wild imagination. He has a crush on Tripp’s mom. He has some bad habits like eating worms.

Greg Baker has had several roles in TV shows. You may remember him as a recurring character on Hannah Montana. He played one of the teachers at Miley’ school. He is going to star as a Rock Wizard in an episode of Wizards of Waverly Place. 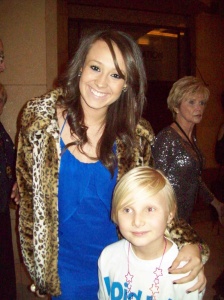 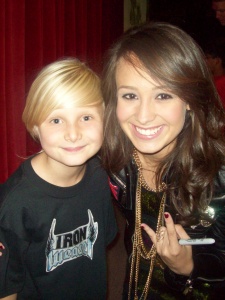 Izzy Fuentas is Tripp’s best friend. They aren’t dating. She wants to be a singer and has been able to  show off her talents in an episode called Izzy Gonna Sing.  She tries to help make sure Tripp wins class president in Weaselgate , an episode that will air later in season 2. She falls for the band’s old lead guitarist named Bleed .

Caitlyn Taylor Love was born in Texas and is a great actress and singer! She was in an episode of Punk’d and was a semi-finalist on America’s Got Talent. She is going to star in a 5 minute Disney XD series called Nasty Ellie. She is also working on her music and releasing songs.

Metal Wolf is  a rival band. Two of these guys are twins. They compete for the same gigs as Iron Weasel. The wear make up kind of like the band KISS but it’ s silver and black.

Shelley Jenson is a producer and director of tons of TV shows including, Suite Life of Zach and Cody, Sonny with a Chance, What I Like about You, Webster and Fresh Prince or Bel Air.

My mom friend’s husband worked on the show so I was allowed to visit the set and take pics in the different sets. This is the garage where Ash, Burger, and Derek live and the band practices. 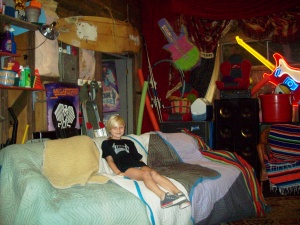 Another pic of the set in the garage.

This pic is from curtain call from one of the tapings I was at called Iron Weasel:The Video Game. There’s G. Hannelius.

This is Ezra. At live tapings, warm up guys keep you happy and laughing in between the taping of scenes. This guy is the BEST warm up guy in Hollywood. He has contests and gives out prizes like script covers. He has been on Sonny with a Chance as a dentist (when Sterling’ s tooth fell out) and on Wizards of Waverly Place (as a science teacher and Jack in the Box). 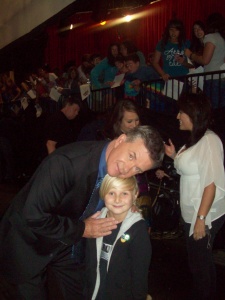 Alan Thicke is going to play Simon Craig, the bands new manager. He is also the manger of Iron Weasel so things get a little tricky.

I’m pretty sure the show is finished after season 2. It has a lot of fans but I haven’t heard about a season 3. I enjoyed the show and love the whole cast. They have all been very sweet!

My mom and I work hard on them.

I have written many other Blogs about other tv shows tapings and meeting the casts.

My videos from You Tube all in one place!

Comments on: "I’m in the Band (meeting the cast and visiting the set)" (6)